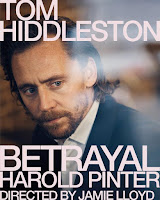 It's time for my review of Betrayal.
Betrayal centres around the seven-year extramarital affair between two characters, Emma and Jerry, who would meet in secret at a flat without the knowledge of their significant others. Playwright Harold Pinter has said before that Betrayal is the one play that most resembles his own life, which is largely as a result of his of his own experiences with extra-marital affairs.

The story of Betrayal is an interesting one, and involves a number of rather interesting concepts. The idea that Jerry maintains a strong friendship with the character of Robert whilst continuing to have an affair with his wife is rather intriguing, and certainly makes for interesting viewing. The themes explored within the play include hidden emotions and veiled motivations, and their self-absorbed competitive one-upmanship, face-saving, dishonesty, and self-deception. The play does have elements of psychology within, providing an in-depth analysis of the thoughts and feelings of the three main characters. The characters of Robert, Emma and Jerry are all very well written, and the dynamics created between them are fascinating to watch. Each of them have very unique relationships with one another, and it is interesting to see how this changes over the course of the nine years.

Tom Hiddleston, in the role of Robert, was outstanding. He was excellent at finding the humour within the role, whilst also excelling during the more dramatic moments of the play. Hiddleston is gifted with a natural stage presence, and seemed well-suited to this particular role. Zawe Ashton, as Emma, gave a flawless performance. Ashton has crafted out a very good characterisation, and it was particularly interesting to watch the electric chemistry that she had with both Hiddleston and Cox, therefore emphasising the impact of this love triangle. Last, but by certainly no means least, Charlie Cox as Jerry was equally as marvellous. In his portrayal, Cox perfectly combines both the hopeless love Jerry has for Emma along with the immense guilt he feels towards his best friend. All three performances were well and truly excellent, and all were a delight to watch.

Now for my final verdict on Betrayal. I give Betrayal...

Betrayal was a very interesting piece of theatre; it has an intriguing concept, and this particular production featured outstanding performances from all of those involved. I was very glad I had the opportunity to see it.

-The Reviewer
Posted by The Basic Theatre Reviewer at 13:49 No comments: