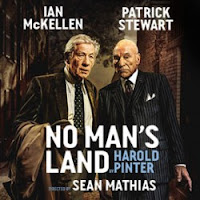 It's time for my review of No Man's Land.
After doing No Man's Land on Broadway 3 years ago, Ian McKellen and Patrick Stewart have reunited to bring the play to the West End's Wyndham's Theatre. We have had this show booked for AGES, 6 and a half months to be precise. On the list of "Upcoming shows" it has had the company of Harry Potter, which I am seeing in January. But after months and months, the day finally came. What a privilege and honour to see two legends and giants of the stage onstage together. Ian McKellen and Patrick Stewart make a theatrical team like no other. Not even Hamilton co-stars Lin-Manuel Miranda and Leslie Odom Jr. can beat them! They are a force not to be reckoned with, never have I seen such a stunning pair of actors. I'm not sure anyone can match them. Both are extremely strong actors and give unforgettable performances as Spooner (McKellen) and Hirst (Stewart). The show also stars Owen Teale as Briggs and Damien Molony as Foster. It is difficult in a show like this with two giants such as McKellen and Stewart, as other actors are likely to get overshadowed, but Teale and Molony hold their own and give very strong performances. I found the play to be hugely interesting, it is quite deep and thought provoking and it does challenge the audience. The four characters were fascinating, I would love to study the play at school as I think they are good characters to analyse. The play incorporates a lot of comedy, which was well done and had the audience in stitches. I thought the costumes and set were well designed, which are both done by Stephen Brimson Lewis. Constructive criticism I have about the show is that I feel the beginning scene should be cut or shortened, it just felt like it was too long and really dragged. The show picked up shortly after, but I think it would help the show to have a beginning which introduces the characters a little better. During act one I was a little confused and I must admit to having to search on Wikipedia for who was who and why they were at this house. As soon as I found this out, everything fell into place. For those who do struggle to understand certain plays, I would suggest looking up a brief synopsis of the show.

The featured star of No Man's Land is, drum roll please... PATRICK STEWART!

This is the hardest decision I have EVER had to make for featured star. Patrick Stewart and Ian McKellen are just so good and so hard to choose a favourite. I even considered tossing a coin to decide who should get featured star out of these two! After much debating, I went with Patrick Stewart, as I feel he got to display more emotion with his character.

I give this rating because even though the play gets confusing at times, the show features unmissable acting that cannot be faulted.

Join me next time when I will be reviewing School of Rock.

-The Reviewer
Posted by The Basic Theatre Reviewer at 13:14 No comments: