It's time for my review of Utility.
This weekend, I thought that it would be a good idea to visit one of my favourite local theatres, The Orange Tree! Currently playing at the Orange Tree is prize-winning play Utility, which has been written by young American playwright Emily Schwend.


Utility centres around Texan young mother Amber, who is juggling two nearly full-time jobs and three kids. Her on-again, off-again husband Chris is eternally optimistic and charming as hell, but rarely employed. The house is falling apart and Amber has an eight-year old’s birthday party to plan. As Amber struggles to keep things from boiling over, she is forced to confront reality – she is a stranger to the person she once was and the person she thought she might be. The storyline follows a fairly simple premise, but I would personally argue that Utility's main feature is not its story: it's the characters within the show. Utility follows four different characters, all of which are highly interesting. All four of them have their own different problems, whether they are aware of them or not, and they all have their own views on society, with each of them expressing these opinions in different ways. The interactions and dynamic created with these characters makes for interesting viewing, and there is some very well-written and meaningful dialogue throughout the course of the play. Emily Schwend's writing is truly excellent, however there was one issue that I took with the play's storyline, and the issue was that I felt a little underwhelmed by the ending of the play. Once Utility had come to a close, it felt as if it should not be ending yet and there were dozens of questions left unanswered. There were still areas and themes for the play to explore by the time it had ended. Utility currently stands at 1 hour and 35 minutes, and I feel that it could definitely go on longer than this.

Personally, my favourite aspect of Utility was its stellar cast. Each member of the cast created a fascinating characterisation for their individual roles, and it was clear that they all had great chemistry with one another. In addition to this, the Texan accents used by this English cast appeared to be highly realistic; there was not a hint of an English accent in any of the portrayals. In the leading role of Amber, stars Robyn Addison. Addison creates a very realistic portrayal of Amber, making it impossible not to emphasise with the character. Addison had crafted what I would deem a highly believable and honest performance. Performing as Amber's lazy husband, Chris, is Robert Lonsdale. Lonsdale was also exceedingly convincing, and created a very good characterisation. As Chris's brother, Jim, was Matt Sutton. Sutton provides a nuanced performance, which ensured that his character provided the calming influence amongst the otherwise chaotic life of Amber and Chris. Therefore, Sutton's performance contrasted well with Robyn Addison's portrayal of Amber.
Finally, in the role of Amber's Mother Laura, is Jackie Clune. Clune was clearly very experienced on the stage, and added a lot to the production.

Whilst all four cast members were excellent, it was Robyn Addison's heartfelt performance of Amber that stole the show. Addison was highly believable in the role of Amber, therefore making it impossible not to want to root for the character. Addison is a highly skilled actress and I'm sure she is destined for great things.

Now for my final verdict on Utility. I give Utility...

Utility appears to have divided opinions, however I would say that I hold an overall positive view on the play. Whilst it is not without its flaws, the characters within the play and their interactions make for fascinating viewing.

-The Reviewer
Posted by The Basic Theatre Reviewer at 10:56 No comments: 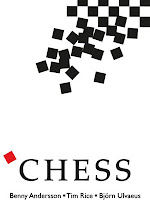 It's time for my review of Chess.
The West End revival of Chess caught my attention a number of months ago, and I was rather interested in seeing it, however it was only running for a very limited time and therefore it looked unlikely that I would have the opportunity to see it. However, as a wonderful Birthday surprise, my American friend Broadway Bob (shoutout to @BroadwayBobNYC) bought me a ticket to see it. As a result, I was able to watch it the day before its closing performance.

This production of Chess's strongest aspect comes in the form of its spectacular cast. Within this cast, there some absolutely outstanding actors, powerful singers and skilled dancers. In the leading role of professional Russian chess player Anatoly is Michael Ball, OBE. Ball has quite the stunning voice; I was truly astonished by the power of his singing. His performances of songs such as 'Where I Want To Be' and 'Anthem' were phenomenal. Additionally, Ball is also an exceptional actor, providing an exceedingly powerful performance. Ball appears to be very well suited to the part of Anatoly. In the role of Anatoly's love interest, Florence, was Cassidy Janson. Janson's voice is marvellous, and she gives both a believable and heartfelt performance. Tim Howar performing as Freddie, Anatoly's American chess rival, creates a great characterisation for the role. His solo in Act 2 of 'Pity the Child' was very moving and I would go as far to say that it was one of the highlights of the show. Portraying Anatoly's wife Svetlana, is singer and songwriter Alexandra Burke, who I had previously seen perform in The Bodyguard. Despite the limited stage time that Svetlana has, Burke makes every second count, still making a large impact on the audience.

The score of Chess, which has been composed by Benny Andersson and Björn Ulvaeus, is sensational. They are many beautiful melodies throughout the show, as well as some very well-written and intelligent lyrics, which were written by Tim Rice. My personal favourite songs from the score would be 'Anthem', 'Someone Else's Story', 'I Know Him So Well' and 'You and I'. The orchestrations for this production were sublime and undoubtedly did the score justice. The gigantic orchestra of the London Coliseum (containing over 70 musicians) are wonderful and were a joy to listen to.

My only major criticism for Chess would be that it was longer than it needed to be (the production currently stands at 2 hours and 45 minutes). There are several games of chess which are played live on the stage, which each match seeming to last 4-5 minutes. I personally felt that these matches were somewhat unnecessary and a little long-winded. Additionally, I also felt that the musical numbers 'Merano' and 'One Night in Bangkok' dragged on somewhat, and therefore these too could be shortened.

Both the set design and lighting design were superlative. The set design recreates a giant chess board, which seems to work rather efficiently and appears to have certain connotations behind it. The mighty chess players are no more than pawns, being manipulated by their respective governments. The characters may think that they have control over their own chess board's, but the hidden reality is that they are just pawns of a great game. The lighting design was also extremely effective and helped to tighten the more dramatic and tense moments of the show. As for the sound design, I held mixed views on this particular aspect. Due to the sound design, there was a portion of the lyrics which became difficult to hear and understand. The choreography was remarkable, and the ensemble featured some very talented dancers, who carried out the choreography flawlessly.

Michael Ball gives an utterly flawless performance in the role of Anatoly. He is an exceptional singer and has a voice like no other. His performance is outstanding and one which I am sure to remember.

Now for my final verdict on Chess. I give Chess...

Chess isn't without its flaws, but its phenomenal score and incredible cast more than make up for it. Chess sadly closes tonight (2nd June 2018), but I congratulate it on its successful run!

-The Reviewer
Posted by The Basic Theatre Reviewer at 09:48 No comments:

The strongest aspect of  An Ideal Husband is, undoubtedly, its phenomenal cast. This production has been very wall cast; all of the cast members within the show seem very well suited to their individual parts. There were no weak links amongst the cast whatsoever and some extremely powerful performances were provided. In the leading role of Sir Robert Chiltern is Nathaniel Parker, a performer who is visibly very skilled. Parker excels at both the comedic elements of the play, as well the more serious moments, demonstrating his versatility as an actor. Throughout the play, Parker is able to provide an exceedingly powerful portrayal. Portraying Lady Chiltern, the strong and moral wife of Robert Chiltern, is Sally Bretton. Bretton is tremendously believable as Lady Chiltern, and seemed rather well-suited to the character.  Portraying the play's main antagonist Mrs. Cheveley is Frances Barber. Barber is outstanding in this role, creating a very convincing characterisation. As the Chilterns' best friend and confidant Viscount Goring is Freddie Fox. Similar to Nathaniel Parker, Fox is very versatile, handling both the comedic and serious elements of the play tremendously well. In my eyes, it was Fox that stole the show. He's funny, he's got great comic timing and he's charismatic; he had everything needed for a leading actor. Freddie Fox appears alongside his father, Edward Fox, who portrays the Earl of Caversham (who happens to be the father of Freddie Fox's character, Viscount Goring). Despite being the oldest cast member on the stage, Edward Fox is still full of life and energy, providing laughter for the audience from beginning to end! Starring as Miss Mabel Chiltern is Faith Omole, an actress who happens to be making her West End debut! It is amazing to think that this is the first time that she is appearing on a West End stage, as she was truly terrific. The role of Miss Mabel Chiltern seemed to be the perfect role for her to showcase her talents.

An Ideal Husband follows ambitious government minister Sir Robert Chiltern, who is on an assured smooth ascent to the top... this is until Mrs. Cheveley appeared in London with damning proof of his previous financial chicanery. Mrs. Cheveley threatens to tell the press of Chiltern's past, unless he puts his support behind a project that he is personally against. I personally found the storyline to be very interesting to follow. There are themes of feminism throughout the play, something which appears to a recurring theme throughout Oscar Wilde's plays. His accurate portrayal of society in that era makes for an interesting comparison to today's modern society. I did find that the story of An Ideal Husband took a while to gain traction, however once it develops and picks up the pace it becomes truly fascinating.

I am pleased to say that this was yet another hit by the Classic Spring Theatre Company! Their final production of 'The Importance of Being Earnest' will begin in late July and I cannot wait to see it!

The featured star of An Ideal Husband is, drum roll please... FREDDIE FOX!

Personally, I felt that Freddie Fox completely stole the show. It almost seemed as if he had been born to play the role of Viscount Goring; he seemed so utterly perfect for it. He was a joy to watch whenever he entered onto the stage!

This production of An Ideal Husband features one of the strongest casts on a West End stage currently performing. There are many outstanding performances and I would personally argue that the acting is worth the ticket price alone.

-The Reviewer
Posted by The Basic Theatre Reviewer at 08:11 No comments: