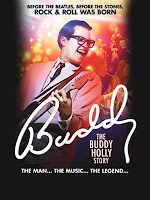 It's time for my review of Buddy – The Buddy Holly Story.
I first saw Buddy – The Buddy Holly Story over 6 years ago, which I have a distinct memory of as it was the day before my Birthday. I really enjoyed the show 6 years ago and I am happy to say that I have come away with the same thought after seeing it second time around. I'd actually forgotten large portions of the show, so it was nice to refresh my memory. There are many things that I love about this musical, but the main one is that I personally feel that when you see Buddy – The Buddy Holly Story, a good time is guaranteed! The show is able to achieve getting the whole audience up on their feet dancing at the end of the show, which is an extremely hard task to achieve. It's the type of show with a high level of 'feel-good factor' and will be enjoyable for all ages regardless if you are familiar with the music. A leading cause of the show being so fun is the use of audience interaction. There are a few points throughout the show where the actors require audience interaction, such as seeing which section of the audience are able to cheer the loudest. It was a really nice addition and kept the audience on their toes throughout. The songs are phenomenal; it's truly amazing to think that Buddy Holy wrote such a large amount of songs in such a small amount of time. My favourite songs from the show were 'Johnny B. Goode' and 'La Bamba' (even though La Bamba wasn't performed by Buddy). The music is excellently performed by an absolutely amazing cast. All cast members are multi-talented and they all excelled in their roles. There are some phenomenal musicians amongst them! I found the storyline to be really interesting, and even found parts of it to be somewhat inspiring. Rock 'n' roll was ahead of its time, but Buddy followed his heart and continued to create the music that he loved playing. Despite the odds being against him, he achieved this and created a successful career out of this. The set, lighting and costumes were all designed very well and had no apparent faults. If I had to pick a criticism of the show, I would say that, whilst the book is mostly well written , it could do with some fixing in certain places. In really life, Buddy Holly died in a tragic plane crash age only 22, which had a big impact on the music world. This was an extremely big event, but I felt that the show glossed over it a little too much. I was really eager to see what the aftermath would have been, but none of it is shown. Having said that, I understand why it isn't featured, as they try and maintain a good vibe within the show. Another small critique I have is that there were a few sound issues, but that wasn't a major issue. 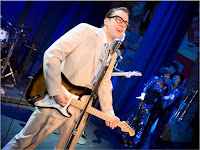 Glen is incredible in the role of Buddy; he nailed literally every aspect of the role. He acted the part really well, he was an amazing singer and was phenomenal at playing the guitar. Glen was the perfect choice to play Buddy, his performance was utter perfection!

Buddy – The Buddy Holly Story didn't quite achieve my 5 star rating, but it was very close. It's a show filled with lots of fun and I would recommend it to anyone of any age looking for a fun afternoon/night out.

-The Reviewer
Posted by The Basic Theatre Reviewer at 13:56 2 comments: