It's time for my review of Rain Man.
This play is adapted from the exceedingly popular 1980's movie Rain Man, which featured Tom Cruise and Dustin Hoffman. I, personally, had never actually watched the movie, however my Mum absolutely adores it. Whilst most people will have seen the movie before watching the play, I did the complete opposite and went to Richmond Theatre without any idea of what to be expecting.

Rain Man tells the story of car dealer Charlie Babbitt who, after learning that his estranged father has died, returns home to Cincinnati where he discovers that he has an autistic older brother named Raymond. In addition to this, he also learns that his father's $3 million fortune is being left to the mental institution in which Raymond lives. Motivated by his Father's memory, Charlie checks Raymond out of the facility in order to return with him to Los Angeles. The brothers' cross-country trip ends up changing both of their lives. I found the story of Rain Man to be rather moving, and it is undoubtedly very interesting to follow. The relationship between these two brothers, and how it changes them, is heartwarming and makes for a satisfying pay-off at the end of the play. My only issue with the script, which has been adapted by Dan Gordon, is that I feel there could be a few amendments to the play in order to make certain moments more powerful.

Without a shadow of a doubt, the cast of Rain Man is the best aspect of the production; each and every cast member gave remarkable performances. Mathew Horne, in the role of Raymond, is immensely convincing as the autistic savant. Horne creates an intriguing characterisation for the role, and impressively does not slip from this characterisation once throughout the entirety of the play. As Raymond's younger brother Charlie, co-stars Ed Speleers. The character of Charlie begins as ruthless and uncaring, and yet as the play goes on he becomes more considerate and compassionate. Speleers does an excellent job at conveying this progression of character, giving an all-round excellent performance. 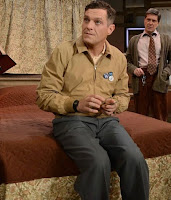 Horne's performance as Raymond was truly and utterly outstanding. I was beyond impressed at his characterisation for the role, and even more so with the fact that he was able to keep this persona throughout the entirety of the play without breaking character once. He was utterly captivating to watch.

Now for my final verdict on Rain Man. I give Rain Man...

Whilst this production lacks imaginative direction, the play's story and cast more than make up for it and therefore I have decided to award Rain Man three stars.

-The Reviewer
Posted by The Basic Theatre Reviewer at 06:43 No comments: