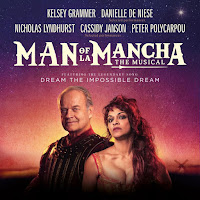 It's time for my review of Man of La Mancha.
Framed as a play within a play, Man of La Mancha sees Spanish writer Miguel de Cervantes performing a play based on his novel Don Quixote to a group of prisoners awaiting a hearing. Its score includes the standard “The Impossible Dream", as well as "Man of La Mancha (I, Don Quixote)" and "A Little Gossip".

Man of La Mancha has many praiseworthy elements, but its book is unfortunately not one of them. To put it mildly, the book is somewhat peculiar. The story makes use of a frame narrative, where in an attempt to win over a group of convicts, Spanish writer Miguel de Cervantes tells them the tale of Don Quixote. The story is not particularly engaging, however, and does feel at times a little bizarre. There are a number of conflicting messages within the show, and I left the theatre not entirely sure as to what the purpose of the story had actually been. Whilst Man of La Mancha is by no means dull, its book could certainly do with a little re-working in order to add some new life to it.

Whilst the book is somewhat flawed, the musical score is utterly perfect. In this instance, the composers have made use of traditional Spanish styles such as flamenco and classical guitar. It's exceedingly lively, as well as rather upbeat. The orchestrations were wonderful, and really helped to further the impact of this marvellous music. The highlight of the score is 'The Impossible Dream', which is a true delight; the song is known for its inspiring lyrics, and has even been quoted in multiple political speeches. Kelsey Grammer's rendition of the song was tremendously well performed, and felt rather heartfelt. Other personal favourites of mine from this score include 'I Really Like Him' and the titular song, 'Man of La Mancha'.

In the leading dual roles of Cervantes and Quixote is Kelsey Grammer, who will be known to many as 'Dr. Frasier Crane' from popular sitcoms 'Cheers' and 'Frasier'. Grammer is one of my all-time favourite actors, and I am glad to report that he did not disappoint. He is filled with charisma from head to toe, and is certainly intriguing to watch. In addition to his acting skills, Grammer is also gifted with an outstanding voice, which was rather evident in his rendition of 'The Impossible Dream'. As the show's leading lady Aldonza starred Danielle de Niese, who was equally remarkable. De Niese has an incredible voice, and has a good presence on stage. I found her to be rather convincing in the role, and she was perfectly cast. Nicholas Lyndhurst was also brilliant, portraying the dual roles of The Governor and The Inkeeper. Whilst having limited stage time, Lyndhurst made every moment count and certainly left an impression. A special mention must also be awarded to Peter Polycarpou as Don Quixote's loyal assistant, Sancha Panza, who gave a funny and enchanting performance.

Whilst the book is far from perfect, the show still has a number of redeeming factors. With a delightful score and a stellar cast, Man of La Mancha is still rather enjoyable.

-The Reviewer
Posted by The Basic Theatre Reviewer at 11:54 No comments:

Review: Fiddler on the Roof

It's time for my review of Fiddler on the Roof.
Set in Russia at the turn of the 1905 Revolution, Fiddler on the Roof centres around Tevye, a Jewish man who works hard to ensure that he raises his five daughters with traditional Jewish customs. When the village matchmaker brings news that a wealthy butcher wants to marry their eldest child Tzeitel, it’s clear that pairing people together isn’t what Tzeitel wants. Tzeitel wants to marry her childhood friend, Motel the tailor. The wishes of his daughters force Tevye to make the ultimate choice: his family, or his religious traditions.

I had previously seen Fiddler on the Roof on Broadway in 2016, a production which had been directed by Tony Award Winner Bartlett Sher. I had absolutely loved Sher's production of Fiddler, and was therefore rather eager to see Trevor Nunn's take on the show, which is currently playing at the Playhouse Theatre. Whilst I did prefer Sher's production for a number of different reasons, it was still intriguing to see a new take on the show and compare the differences between the two productions.

The aspect of Fiddler on the Roof that I particularly admire is the fascinating insight that it gives us into religious communities and their long-standing traditions. The way in which religion is explored within the show makes for very interesting viewing. Whilst holding very old-fashioned views, the sense of belonging and affection within the Jewish community presented in this instance is rather heart-warming. I would personally argue that Fiddler on the Roof is a truly timeless piece. Whilst being set in 1905, the themes explored within the show are still likely to resonate with a modern audience.

The musical score, with music by Jerry Bock and lyrics by Sheldon Harnick, is excellent. There are a number of timeless classics to be found in the score; the songs featured in Fiddler have been popular for decades, and will likely continue to be so for upcoming decades as well. A couple of my personal favourites from this score include 'Tradition' and 'To Life'.

In the leading role of Tevye stars Andy Nyman, who gives an exceedingly heartfelt performance. Nyman truly comes into his element towards the end of Act Two, where the tone of the show begins to take a slightly darker turn. He also had an outstanding singing voice, which was evidenced by his rendition of 'Chavelah'. My only slight criticism of Nyman's performance was his accent, which did waver somewhat. Playing the role of Golde was Judy Kuhn, who I had previously seen in Fun Home on Broadway several years ago. Kuhn is perfect for the role, and was good at finding the humour in the role. It should also be noted that Kuhn is an excellent singer. All three main daughters, portrayed by Molly Osborne, Harriet Bunton and Nicola Brown, were marvellous and gave stand-out performances in their own right. All three actresses had great chemistry with one another, which was evident in 'Matchmaker, Matchmaker'. A special mention must also be given to Joshua Gannon, in the role of Motel, who gave a flawless performance. Gannon was a talented actor, singer and dancer, and had good comedic timing.

The set, designed by Robert Jones, was excellent and  perfectly captured the essence of a small town located in the country. The set was not particularly colourful, but this helped to set the tone for this particular production very well. The lighting, designed by Tim Lutkin, was also rather impressive and was used effectively in conveying the tone and mood of the production.

Whilst not quite on a par with the Broadway production, it still made for interesting viewing and I was glad to have had the chance to see it.

-The Reviewer
Posted by The Basic Theatre Reviewer at 06:44 No comments: