It's time for my review of Pride and Prejudice.
Having seen Sense and Sensibility in New York this year and really enjoying it, I was very keen to see another play by Jane Austen. It was really interesting to see the similarities between the two shows, one of these being the ending felt exactly the same. There were times I even had some déjà vu. The shows best aspect is its stellar cast. Each and every one of the actors were brilliant, there was no weak link at all. All of them showed great depth to their characters, the cast is the backbone to this production. Cast members who stood out were Tafline Steen as Miss. Elizabeth Bennet, Benjamin Dilloway as Mr. Darcy, Matthew Kelly as Mr. Bennet, Felicity Montagu as Mrs. Bennet, Kirsty Rider as Miss. Caroline Bingley and Steven Meo as Mr. Collins. The cast work so well with each other, I cannot stress enough how well casted the show was. The show needs a lot from the actors, as they have to be good at both the comedy and dramatic aspects, but they nailed it all. The costumes and set were excellent, they were definitely West End worthy. The show featured a revolving set which was well-suited to the show. I was a big fan of the staging by director Deborah Bruce, it was the staging that truly helped transport us into the character's worlds. The music, composed by Lillian Henley was perfect and added to the charm of the show. As I've mentioned before, it can be very hit and miss with the touring shows that go to Richmond Theatre, but this was one of the hits. My one criticism for the show is that I felt that certain scenes were stretched out for a little too long and would've been very easy to shorten. It's important to not have too many stretched out scenes in a show like this, as a lot happens and it needs to keep the audience's attention throughout. I haven't been to the theatre that much in the past 3 months, due to being really busy with school work, so it was fantastic to have had the chance to catch this brilliant production.

The featured star of Pride and Prejudice is, drum roll please... TAFLINE STEEN! 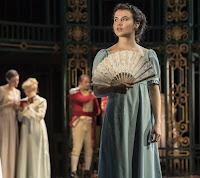 Tafline is absolutely incredible as Miss. Elizabeth Bennet, she was born to play this part! She has every part needed for this role down to a tee. She is the glue that holds this production together. Tafline has a command of the stage, the focus is all on her whenever she enters. At the interval, I realised I recognised her from another show, so went to check in my programme and found out I had seen her on Broadway in King Charles III. She was great in that too!

I give this rating because it is a charming production with a stellar cast. It's only fault are its longer scenes, but that is not a huge worry.

Join me next time when I will be reviewing Ragtime.

-The Reviewer
Posted by The Basic Theatre Reviewer at 12:40 No comments:

It's time for my review of School of Rock.
Just want to start off by saying, sorry for the 2 week delay. I saw SoR during my half term and as soon as school started was busy, busy, busy again.
Almost a year ago (December 2015), I went to see School of Rock on Broadway and I loved, loved, loved it! I was pretty tired when I went along in America though, due to jet lag, so I was thrilled to be able to have the chance to see it again. I was intrigued to see how the show would do with an English cast and I am pleased to say the show is in great shape. I loved it! It's funny, it's heartwarming, it's clever, it's got everything to make a perfect show. After much speculation who would be playing the lead role of Dewey Finn, a few months ago it was confirmed that Alex Brightman would not be transferring with the show and instead David Fynn would be starring as Dewey. Alex was the star of the show in New York, so I was a little worried how the show would do without him. Well those worries soon went away, because David is phenomenal! Wow is the best way to describe his performance. He's really nailed everything about the part, the physicality, the singing, the humour. David is one of the best leading men in the West End right now and it's incredible to think he is onstage for almost all of 2 hours and a half. It's amazing someone has the energy to do all of that! In the role of Rosalie Mullins was understudy Rosanna Hyland. On Broadway the role was played by Sierra Boggess, who was ok but didn't give an especially good performance. Rosanna on the other hand is remarkable! She added a lot of depth into the character which was missing on B.Way. I found myself truly caring about the character. Her performance of 'Where Did The Rock Go' was an absolute showstopper and brought the house down. Preeya Kalidas was also great as Patty and just as good as her Broadway counterpart. Anyone who sees this performance is in for a real treat! As I said in my review in December, I adore the music from the show and it is one of my favourite Andrew Lloyd Webber scores. One more thing to add is that I really liked the lighting design. Onto the part everyone who I know who has seen the show in America wants to know about... the kids. The majority of the kids were great, especially the kid playing Zack (who could act, sing, dance and do an American accent). However they didn't quite match up to the American kids, due to some of them struggling with American accents and certain lines being rushed or stumbled upon. The problem is, in America there's only one child per role, but in England it's three per role so I completely understand it is extremely difficult to have kids who are triple-threats. One way to fix the accent problems is to take away the American aspect of the show? The show was still in previews when I saw it so it is understandable the kids are going to take time to warm to their roles. As I said, the majority of the kids are good and the others will soon get there.

The featured star of School of Rock is, drum roll please... DAVID FYNN! 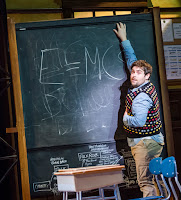 I don't want to repeat myself too much, so I'll keep this nice and short. David is an absolute star and has managed to fill the big shoes left by Alex Brightman. He's put his stamp on the role and I commend him for that.

I give this rating because it's a fun and feel-good show for the whole family. With the recent depressing election news, this is just the show to cheer people up.

Agree with my rating? Think it should have got a lower rating? If so comment below.

-The Reviewer
Posted by The Basic Theatre Reviewer at 04:33 No comments: