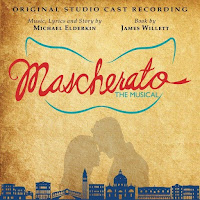 It's time for my review of Mascherato.
Set in the heart of 18th century Venice, the story follows Luca and Elena who meet and fall in love at the famous carnival. However, when the pair are separated by war, they must fight against the forces of fate in order to be reunited.

Mascherato is a brand new musical, having gone through the initial development stages and a staged workshop within recent years. Shortly after the COVID-19 pandemic lockdown was partially lifted, Mascherato was recorded as a concept album at the well-known Abbey Road studios. Taking into account that theatres across the globe have been forced to cease activity, this is a brilliant way to keep the arts alive during these uncertain times. Whilst many are obviously yearning to return to live theatre, projects such as Mascherato are excellent ways to still engage with this much-loved form of art. It is important to note that Mascherato is an entirely original musical, with a plot and musical score that has been written exclusively for the show. This can be quite a rarity in the UK and, truth be told, I cannot even recall the last time there was an entirely original West End musical. This demonstrates that Mascherato is quite an ambitious project, and should thus be commended. The fact that this album gives us a glimpse into the early stages of the show's creation is also fascinating, and I would be very interested to see how Mascherato develops further. It certainly has the potential to go to the West End someday, and I am sure it would prove very popular.

The original score, by Michael Elderkin, is utterly wonderful. It's truly enchanting, and feels as if it should belong to a fairytale. Each song is unique in its own way, and there are several memorable tunes featured throughout. The song 'See Her Again', which depicts an army general reminiscing over memories of his deceased wife, proved to be a particular highlight. With a beautiful melody accompanied by heart-breaking lyrics, it is a real stand-out. From a narrative stand-point, the song also proves useful, as it really adds depth to the character of General Attilo, and makes his eventual fate all the more tragic. Additionally, James Spilling's rendition of it is completely faultless. Another highlight to be found within the score is 'What's in a Memory?', which is equally as heart-breaking. The lyrics of this song are both profound and haunting, and it proves to be very impactful emotionally.

Mascherato's story is very charming, and I very much enjoyed following the narrative as it went on. Despite not actually watching it, the show is easy to envision, which demonstrates that the storytelling was done very well indeed. Narration and dialogue featured throughout, and I felt that this proved beneficial in advancing, as well as helping the listeners to understand, the narrative. The characters featured are also well-written, and I really felt myself rooting for the main characters of Luca and Elena to succeed. My only slight critique of Mascherato's story would be its ending, which I would have liked to have seen more fleshed out. For example, towards the show's ending, the character of Lenadros, an Ottoman general, vows to murder Luca, and yet this confrontation never actually takes place. It should be noted however that, as previously stated, the show is still in development. As a consequence of this, plot points such as these may evolve, should Mascherato ever make it to the stage.

The cast of Mascherato are all excellent, and the performers all portrayed their characters very well. In spite of the fact we could not see the actors, there was still clear characterisation, which demonstrates the extent of their talents. Rob Houchen, as Luca, was remarkable, and really embodied the role flawlessly. The character's excitable nature really came through, which was well conveyed by Houchen. Beyond that, he also boasts an incredible voice, as seen through his rendition of 'What's in a Memory?'. Oscar Colon-Murray, as Corto, Timeo and Pasqualin, is also worthy of a special mention. Conlon-Murray portrayed three different roles, which is no easy task, and yet he did so with great skill. As a performer he is naturally funny, and that is evident throughout the recording.