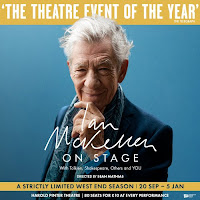 It's time for my review of Ian McKellen on Stage.
To celebrate his 80th Birthday, Sir Ian McKellen is bringing his one-man show, Shakespeare, Tolkien, Others and You to the West End's Harold Pinter Theatre following on an extensive tour of London and the UK visiting venues far and wide that have had a part to play in the actor's legendary career. Taking to the stage with stories and anecdotes from his illustrious career both on stage and screen, McKellen performance reprises extracts from his most-renowned performances, which include Shakespeare's Lear and Tolkien's Gandalf from Lord of the Rings, while engaging with audience members to help craft the show.

Veteran actor Ian McKellen is well and truly a national treasure. His contributions to theatre, as well as the big screen, are undeniable and his talents are like no other. This one-man show takes the audience on a fascinating journey spanning the entirety of McKellen's life, and tells us of his backstory, his love for the theatre and how he was able to achieve success, in what many view as a highly competitive industry. He also speaks of his most famous roles, including the infamous wizard Gandalf from the critically-acclaimed 'Lord of the Rings' film trilogy. McKellen's life story is fascinating, and certainly made for interesting viewing.

McKellen has an exceedingly engaging persona, which proves vital for this one-man show. The whole experience feels very personal, due to McKellen's ability to connect with the audience. He has impeccable comedic timing, and is a master of all acting styles. During the show, he clearly demonstrates the extent of his talents, flawlessly delivering extracts from novels, poems, scenes from The Lord of the Rings and several Shakespearean monologues. If this wasn't enough already, he also performs a song from 'Cats the Musical', of which he will be starring in the movie adaptation this Winter.

My only slight criticism for this production was that I felt the first act was significantly stronger than the second. Whilst the first half consisted of a range of different works, the second half was solely focused on Shakespeare. I feel that diversifying act two may have benefitted the production, but it was still thoroughly enjoyable nonetheless.

Overall, Ian McKellen on Stage is a wonderful experience. McKellen is one of the greatest entertainers of the past century, and this one-man show serves as a clear testament to that statement. He is truly a marvel.

This was a wonderful experience, and I am thrilled to have had the opportunity to see it live.

-The Reviewer
Posted by The Basic Theatre Reviewer at 05:54 No comments: