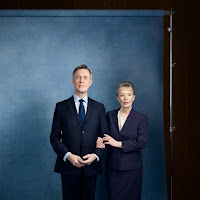 It's time for my review of Hansard.
It’s a summer’s morning in 1988 and Tory politician Robin Hesketh has returned home to the idyllic Cotswold house he shares with his wife of 30 years, Diana. But all is not as blissful as it seems. Diana has a stinking hangover, a fox is destroying the garden, and secrets are being dug up all over the place. As the day draws on, what starts as gentle ribbing and the familiar rhythms of marital scrapping quickly turns to blood-sport.

In regards to Hansard's story, I had mixed feelings. Whilst elements of the narrative are very interesting indeed, there are parts which felt a little repetitive. The play's strongest moments come in the final half hour, when Hansard begins to move away from the political disagreements of Robin and Diana, and instead focus on their own lives and the impact of their son's death. Although this part of the play was rather depressing, it had the desired effect of a heavy emotional impact. For the first time throughout the whole play, the audience begin to feel sympathetic towards these characters in response to the grief they have undergone as a result of losing their son. Such emotion was previously missing in the play, and I was therefore appreciative of the show's ending. In regards to the negative aspects of Hansard's story, the first hour of the show does feel rather monotonous. The show features a back-and-forth argument between the married couple, with their contrasting political views and personalities severely clashing. The argument did become somewhat tedious after a while, and it felt rather prolonged. In order to combat this, I feel that the introduction of a new character, or perhaps a change of setting, could have helped to make Hansard a little more interesting.

Hansard consists of only two characters, who in this instance are portrayed by Alex Jennings and Lindsay Duncan. Both performers are perfectly cast and were a true delight to watch. Whilst both characters are somewhat flawed people, the actors still succeed in gaining our sympathy for them. Alex Jennings, as Robin, was remarkable and convincingly embodied the persona of an uptight and pompous Conservative politician. In particular, Jennings shone in the final 15 minutes, whereby Robin begins to shed his cold personality and demonstrates emotion that we had not previously seen. Lindsay Duncan, as Diana, was equally as extraordinary. Duncan has a fantastic stage presence, and was highly engaging throughout. She gave both a believable and heartfelt performance.

Now for my final verdict on Hansard. I give Hansard...

Whilst the narrative of Hansard is not perfect, the two leading performances are unquestionably outstanding and more than make up for any of the play's shortcomings.

Review: The Elixir of Love

It's time for my review of The Elixir of Love.
Originally set in the basque country of Northern Spain in the 1870’s, this new English version of The Elixir of Love transposes the action to the Italian immigrant community in the Welsh seaside town of Barry Island, in 1982. As the Falklands war gains momentum and Thatcherism ravages the UK, can lovelorn poet Nemorion win the affections of the charismatic Adina?

The cast of five featured in The Elixir of Love were well and truly outstanding in every sense of the word. They had wonderful chemistry with one another and played off each other very well. The interactions that took place between them were fantastic, and they really did work very well together. In addition to this, all five performers were naturally gifted singers. The cast had minimal musical support, due to the fact that their only backing is a lone pianist. This fact further highlights the strength of their abilities, as it demonstrates the power and control of their voices. I was in awe of their talents; the cast members of The Elixir of Love simply cannot be praised enough.

As the charismatic Adina starred Alys Roberts, who was excellent. Roberts had what was, arguably, the most vocally demanding role within the show, and yet she made it look effortless. Her voice is beyond exceptional and could unquestionably fill a West End auditorium. David Powton, as the lovesick Nicky, was also remarkable, which was largely as a result of his brilliant characterisation. I felt that Powton was particularly good at showing Nicky's growing confidence as the show went on in a way that seemed genuine and believable. Themba Mvula, as Brandon, was equally as marvellous, and engaged with the audience very well. Caroline Taylor, as Gina, was also good, giving an all-round solid performance. It was, however, Matthew Kellett as Dulcamara who stole the show with his scene-stealing solo number in Act One. I found Kellett's solo to be the overall highlight of the show, which was largely as a result of his precise comedic timing and larger than life stage presence.

The story of The Elixir of Love is fairly simple and rather predictable at times, but still fun and enjoyable nevertheless. There is a lot of humour to be found within the story, somewhat reminiscent of works by Gilbert and Sullivan. Act One, in particular, was absolutely hilarious and had many audience members laughing in hysterics. The character of Dulcamara, the sleazy conman, was particularly well written and provided comedy throughout.

The Elixir of Love was a complete and utter joy to watch. The cast were astonishing, and I hope to see them perform again within the near future.

Review: Voices From Across The World 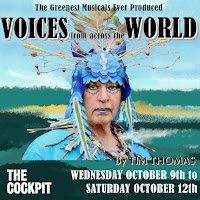 The aspect of Voices From Across The World which really stood out was the show's stellar cast. The actors within the show had an infectious energy which really translated well. It was clear from beginning to end how much the cast were enjoying themselves, which was a true and utter delight to see. Each and every performer put maximum levels of passion and enthusiasm into their performances, and it certainly paid off. The most striking thing about their performances, however, were how many of them had remarkable voices. There were several outstanding singers among the cast, and there were a number of excellent solo-numbers.

In regards to those who stood out, Suzie Aries was a definite highlight. Aires is gifted with a wonderful stage presence, and she was perfectly cast as Miranda. The way in which she presented the caring nature and warm personality of Miranda was very believable, making it easy to connect with the character. Chameli Meir was also outstanding, which was largely as a result of her convincing portrayal of Ganchimaya in the second act. She successfully demonstrated Ganchimaya's innocence, creating a solid characterisation in the process. Meir also had a stunning singing voice, which was evident throughout all of her solos. Last, and certainly not least, Tom Dickerson, as the Narrator, was also exceptional. Whilst the Narrator spends a fair portion of the show on the sidelines, Dickerson really comes into his element in Act Two, when he portrays the money-loving and cold-hearted Captain; a role that he excelled at.

As previously mentioned, Voices From Across The World tells two different stories. The first is a tale of London's homeless community and how they live their everyday lives called 'Ship in a Bottle'. Whilst the story was a little simplistic, it was full of heart and had a good message at its core. I would argue that it was a mostly accurate depiction of life on the streets, and it was nice to see the different bonds that were formed by the homeless community. The second story called 'Tahiti' sees a young couple venture onto a remote island, whereby they learn to live and communicate with their animal counterparts. Whilst the message of the story is well-intentioned, and starts off very strong, it does begin to lose focus a little as it nears its end and was perhaps a little too abstract. Having said that, it was still very well acted, and the actors very successfully portrayed the animals featured in the piece.

I was thoroughly impressed by the performances in Voices From Across The World. There were a handful of truly exceptional performers in this piece, and I am sure many of them have bright futures. 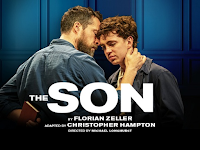 It's time for my review of The Son.
As a family breaks down, a son begins to unravel. Nicolas is skipping school, lying to his family, hiding strange objects under his mattress. Is this typical teenager behaviour or a warning sign of hopelessness?

The Son is a fascinating and very life-like presentation of adolescent mental health, very clearly showing the way depression can affect juveniles and the people around them. Playwright Florian Zeller represents all of the feelings and thoughts surrounding the topic rather convincingly, and by doing so has created an exceedingly moving, yet heartbreaking, piece of theatre. The show examines the way that we should treat mental health, and how we can best help those who suffer from an illness such as depression. He makes a point of arguing we should not belittle or play down such matters as unimportant, due to the long-lasting consequences that this may have. It should be noted that Zeller had a particular talent for manipulating audience emotion. At certain points of the play the stage will be filled with joy and bliss, only to once again resolve in misery moments later. The Son really plays with our emotions throughout, and this aspect is particularly prominent during the show's conclusion. The characters within the play are also really interesting, and I particularly enjoyed the father-son dynamic between Pierre and Nicolas. Whilst not always entirely effective in his methods, Pierre is always well-intentioned when it comes to his son, and this is evident throughout.

In the titular role, Laurie Kynaston as Nicolas was absolutely perfect. He portrayed Nicolas's anxiety and depression authentically, giving a stellar performance in the process. There are moments whereby Knaston displayed glimmers of happiness, therefore creating a fascinating juxtaposition with the character's low points. It seemed that Kynaston was really able to connect with the character, which helped to make Nicolas all the more believable. John Light, as troubled father Pierre, was also outstanding. Light really captured the inner struggles that Pierre underwent throughout the course of the play, with the character trying to find the perfect balance between being a loving yet stern father. Both Amanda Abbington, as Anne, and Amaka Okafor, as Sofia, were also excellent, giving both believable and heartfelt performances.

The Son is the third play that I have seen written by Florian Zeller, and I strongly believe that this should be considered among his strongest works. Zeller has a clear talent for conveying character emotion and gaining empathy from his audience, which is quite evident in The Son. I am excited to see his future works.

Now for my final verdict on The Son. I give The Son...

The Son was superbly written and starred an extraordinarily talented cast; I would be hard pushed to find any relevant faults with the show.

-The Reviewer
Posted by The Basic Theatre Reviewer at 06:23 No comments: