Review: Only Fools and Horses 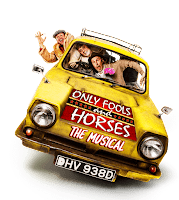 It's time for my review of Only Fools and Horses.
Only Fools and Horses the Musical is based on the 1980s British television sitcom of the same name, and adapts the most popular moments from the series for the stage. It follows two brothers from London's rough Peckham estate as they wheel and deal through a number of dodgy deals searching for the big score that'll soon make them millionaires. Whilst many theatregoers will go to watch Only Fools and Horses the Musical in order to gain feelings of nostalgia, I had not seen the television show prior to watching the play. As a consequence of this, I was experiencing these stories and characters for the very first time.

Only Fools and Horses is not a particularly deep or thought-provoking experience, but instead places its focus on audience nostalgia and light-hearted fun. On the whole, I would personally argue that the show does achieve its primary objectives. The vast majority of those attending appeared to be thoroughly enjoying themselves, proving that this musical does succeed in entertaining its audience. Whilst I myself, as previously mentioned, had not watched the television show, I can imagine that this musical would be true Heaven for die-hard fans. This production is crammed with endless references and in-jokes which only true Only Fools and Horses devotees would fully appreciate. The downside to this, however, is that it does put other theatregoers who may have only seen the occasional episode at a rather large disadvantage. Unfortunately, if you are unfamiliar with such references, then there may be, as I discovered first-hand, a fair amount of confusion.

This production takes different elements of the most popular stories from the TV show and combines them into one sole narrative. Whilst I did find the show's story to be enjoyable, I felt at times that an entirely new and original story featuring these characters may have been better suited for the stage. For example, hit West End play Harry Potter and the Cursed Child takes the much beloved characters from the book series, but tells an entirely new story in continuation of their character-arcs. I did feel that Only Fools and Horses could have potentially benefitted from carrying out something in this manner in order retain maximum creativity and inventiveness.

The highlight of Only Fools and Horses was, undoubtedly, its stellar cast. Each performance was truly outstanding and could not be faulted in any which way. At the performance I was attending, the leading character of Del Boy was played by Chris Bennett, who was understudying. The role of Del Boy is an exceedingly demanding role, rarely ever leaving the stage, but Bennett was well and truly exceptional. By his side were Ryan Hutton as Rodney and Andy Mace as Grandad, both of which were phenomenal. Both Hutton and Mace had excellent comedic timing and created extraordinary characterisations. I have also heard that both actors were very accurate accent-wise in relation to the original characters. A special mention must also be awarded to Oscar Conlon-Morrey, who portrayed the dating agent and various other roles. Conlon-Morrey was a real stand-out and absolutely nailed each of his roles; he thoughtfully distinguished between each character both carefully and cleverly.

The scenic design, by Liz Ashcroft, was also remarkable. The set was filled with immense detail, and felt very realistic. The scenery is accompanied by a back-drop of screen projections, which have been designed by Tim Blazdell. The screen projections were equally commendable, and complimented the set nicely.

Whilst Only Fools and Horses is by no means perfect, it is still thoroughly enjoyable. It is very much a crowd-pleaser, and I am sure it will continue to have a very successful run in London's West End.

-The Reviewer
Posted by The Basic Theatre Reviewer at 09:37 No comments: 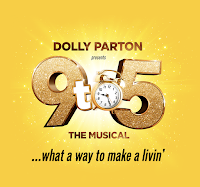 Featuring a number of Dolly Parton's greatest hits, the musical is the story of three employees – Violet, Doralee and Judy – who work under their difficult boss Franklin Hart, Jr. at Consolidated Industries. When it’s revealed Judy doesn’t have any work experience, the others take her under their wing and give her a few tips about surviving in an office environment.

9 to 5 is, undoubtedly, a lot of fun and certainly takes its audience on a wild journey. Whilst at first the show seems to be a simple story about three ordinary office workers who dislike their domineering boss, 9 to 5 later takes a very dramatic turn when suddenly the three women decide enough is enough and go to desperate measures to banish their misogynistic employer. The different twists and turns that the story takes is very amusing, and as the show went on, I became intrigued to find out how it would end. The show has a real feel-good factor, which in turn means audience members will likely leave the theatre overjoyed, and ultimately, that is a very important quality for any show. At the heart of this musical are its messages of feminism and gender equality, as well as sexual harassment in the workplace. Whilst the show is well-intentioned in its attempt to tackle these issues, I did find that these elements of the story could be somewhat corny at times. There was a lack of subtly to the way such topics were handled, which is likely as to why the show's efforts to deal with such matters came across in this way. Despite holding these feelings, I still throughly enjoyed 9 to 5 and found it hard to be averse.

This production has three leads, and those are Caroline Sheen as Violet Newstead, Natalie McQueen as Doralee Rhodes and Amber Davies as Judy Bernly. Sheen, McQueen and Davies were all phenomenal, and had remarkable chemistry with one another, creating a life-like and believable friendship onstage. All three women had excellent voices, and each had a brilliant stage presence; all of the leading performances mentioned were well and truly flawless. Brian Conley, as Franklin Hart Jr., also gave an outstanding portrayal. Conley played the 'comedic villain' role well, and had the audience in stitches throughout. Whilst all of the cast were marvellous, it was in fact stage veteran Bonnie Langford, in the role of Roz Keith, that stole the show. Langford is a gifted stage performer, and never falters in any performance that she carries out. She was utterly hilarious in this particular role, and gave a show-stopping rendition of 'Hart to Heart'.

In regards to creativity, the choreography, by Lisa Stevens, is more than deserving of a special mention. The dance routines were exceedingly up-beat and fuelled by an energetic ensemble. They were a true delight to watch.

Whilst certain elements of the story were a little corny, I still found 9 to 5 utterly delightful and throughly enjoyed it from beginning to end.

-The Reviewer
Posted by The Basic Theatre Reviewer at 07:14 No comments:

It's time for my review of Die Fledermaus.
Baseless Fabric, Finalists at the 2018 Off West End Awards for Best Opera Production, return with a new production of Strauss’ Die Fledermaus. The production will pop up in more than 30 high street venues in Merton and Wandsworth this August, with free, unticketed performances for all, as well as being adapted for two indoor performances at the Arcola Theatre as part of the 2019 Grimeborn Festival.

Classed as a 'street opera adaptation' of the classic operetta, this production of Die Fledermaus was quite unlike anything I have ever seen within my lifetime. As opposed to being staged in a theatre, Die Fledermaus takes place in ordinary settings of cafes, pubs and supermarkets, depending on the location of the performance. At the performance which I attended, the show's initial scenes took place at Ely's Department Store, Wimbledon, whereby the cast launched into this opera within the shopping aisles. After 20 minutes, the actors exited the department store, after which time we were told to follow them through the streets of Wimbledon and to a local pub. It was here that the show resumed and continued the previous narrative. After another 20 minutes, the cast, orchestra and audience once again departed; we were then led to a nearby marketplace, which is where the operetta reached its climax. The production features an immense level of inventiveness, creativity and ambition, which are all admirable qualities for any piece of live theatre. The company organising the show, Baseless Fabric, have the intention of changing attitudes to the art form and convincing people that opera can be "fun and not elitist, expensive, boring or irrelevant". The audience seemed to thoroughly enjoy themselves throughout, and as a result, I would personally argue that Baseless Fabric have been highly successful in achieving such goals. The crowd included a wide range of different ages from very young children to a number of older viewers, demonstrating that Die Fledermaus has a wide appeal and can be fun for the entire family.

Die Fledermaus consisted of only four cast members, and those were Claire Wild, Abigail Kelly, David Horton and James McOran-Campbell. All four performers were incredibly talented singers, which is something that, as an audience member, you gain more an appreciation for when in an intimate space, as opposed to a large theatre. Additionally, it was evident that the cast were really enjoying themselves during the show, which was rather endearing to watch. After all, when it is clear that the cast are having fun, it makes it a lot easier for the audience to find joy within the show as well. They all had remarkable chemistry with one another, and were a delight to watch. A special mention must also be given to the show's orchestra, who were equally remarkable.

I was not quite sure what to expect from Die Fledermaus, but I left Wimbledon very impressed indeed. It was highly innovative, and truly unlike anything else.

-The Reviewer
Posted by The Basic Theatre Reviewer at 09:46 No comments: