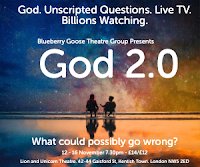 Review: Different From The Others

It's time for my review of Different From The Others.
It's 1919, World War I has ended, men are holding hands in public, Moscow and St Petersburg are gay and free from discrimination and Germany, feeling the full brunt of blame is yet to establish itself. It was then that Magnus Hirschfeld, a German Sexologist and founding father of gay activism seized the opportunity to create the first pro-gay film ever to be made.

The aspect of Different From The Others that makes it so compelling is that it is based on a true story. Whilst playwright Claudio Macor has taken certain artistic licenses in order to further the narrative, the vast majority of what we see on stage is actually quite factual. As a keen historian, I found this fascinating. Despite having extensively studied this period of history, I had not previously been aware of these particular events. As a consequence, I was delighted to have my eyes opened to this significant tidbit of history. Different From The Others tells an utterly intriguing story, and it leaves you wanting to find out more. Upon leaving the theatre, I conducted further research into the events depicted in the play, as well as the characters featured. It is a thoroughly interesting piece of work, and it was an utter delight to watch.

Different From The Others consists of a small cast of six, including Christopher Sherwood, Beth Eyre, Benjamin Garrison, Jeremy Booth, Simon Stallard and Jordan Alexander. All six cast members were phenomenal; there was not a weak link among them. Each and every one of them brought something unique to the stage, and they all worked well as a collective, creating an excellent stage dynamic. A special mention must be given to Simon Stallard, who portrayed the role of Karl Giese. Stallard was highly believable in the role, and successfully conveyed the heartbreaking innocence and naivety of his character. He particularly excelled in the penultimate scene, whereby he made it quite evident the extent to which Karl was torn between his former love for Dr Magnus Hirschfield and his new allegiance to Nazism. Beth Eyre's spell-binding portrayal was also an overall highlight of the show. She had such a natural stage presence, and conjured the perfection characterisation for Anita Berber. Eyre convincingly portrayed Berber's troubled and complex personality, causing the character's eventual demise to be well and truly heart-rending.

Different From The Others is an intriguing piece of work, detailing a unique part of history. In addition to this, there also are a number of masterful performances.