It's time for my review of Dirty Rotten Scoundrels.
Dirty Rotten Scoundrels is my favourite show of all-time, it's exciting funny and magical, so when they announced it was closing in the West End I was mortified. Luckily it was announced that they would be touring the UK. I had pretty low expectations as I was worried they would ruin this amazing show, however it was certainly better than I thought. It was far from perfect, but it was a nice effort. The storyline of the show is: Conman Lawrence Jameson is set to come crashing down with the arrival of larger-than-life Freddy Benson - a conman of an entirely different order. Soon realising the town ain't big enough for the both of them, the two find themselves going head to head in the con of their lives, pulling out all of the stops in a bid for the affections of millionaire soap heiress Christine Colgate. Little do they know what they've let themselves in for. I am glad that it still has most of the hilarious comedy that made me love the show so much in the West End. I feel the funniest part of the show was the song 'Oklahoma?', but I think this is mainly due to the fact that Phoebe Coupe, who sings this song on the tour, puts so much energy into the song. The costumes and set are very inventive and clever. The direction and choreography, by the mastermind Jerry Mitchell, are phenomenal. The ensemble were very good indeed and it was obvious there were some really strong singers and dancers amongst them. Cast members who stood out for me were Noel Sullivan as Freddy Benson, Carly Stenson as Christine Colgate, Gary Wilmot as Inspector Andre Thibault and Phoebe Coupe as Jolene Oakes. Comparing this cast to the cast in the West End, Michael Praed sadly was not as good as Robert Lindsay. He just didn't seem to have the same charm. Michael also seemed to really struggle on the musical numbers. It's a shame because you could tell he was trying really hard. Noel Sullivan was not quite as good as his proceeder, which was Alex Gaumond, either. Noel was really, really good, but Alex to me is and always will be Freddy. Carly Stenson was just as good as Alice Fearn (who was the understudy the night I went to see it in the West End) in the role of Christine Colgate. Geraldine Fitzgerald wasn't as good Bonnie Langford. She also tried really hard but just didn't have the same comic timing, which Bonnie Langford was master of. I hate to say this, but Ben Fox was better than Gary Wilmot. The reason I hate to say that is because Gary was amazing in the role and he brings a whole new life to the character. Phoebe Coupe was 100x better in the role of Jolene than Lizzy. She gave the perfect performance and turned the role Jolene a little psychopathic, which I thought was very clever. One thing that did annoy me about the cast was that there were some annoying facial expressions. The show didn't have quite the charm it did in the West End, but they made a really good effort and I applaud them for that.

Noel was perfectly casted. I read a review the other day criticising him and praising Michael Praed so it's pretty obvious I have different tastes to that person as I thought Noel was incredible. He's a great actor and has a really, really nice voice.

People who know and love the West End version may be a little disappointed, but I am sure anyone who doesn't know the show will love this version!

Join me next time when I will be reviewing Hairspray.

*Please note this show has now finished touring.
Posted by The Basic Theatre Reviewer at 11:03 No comments:

It's time for my review of War Horse.
I saw War Horse three years ago and have been wanting to go back for a long time, so yesterday I finally went and I was totally blown away! The synopsis for those who haven't seen the show is: At the outbreak of World War One, Joey, young Albert’s beloved horse, is sold to the cavalry and shipped to France. He’s soon caught up in enemy fire, and fate takes him on an extraordinary odyssey, serving on both sides before finding himself alone in no man’s land. But Albert cannot forget Joey and, still not old enough to enlist, he embarks on a treacherous mission to find him and bring him home. The story is really clever and I was on the edge of my seat the whole time. There were times the play felt so real I actually forgot I was in a theatre. It's a really moving piece that takes you on a roller-coaster of emotions.. The staging, set and lighting are all amazing. The horses are portrayed with puppetry and never before have I seen such convincing puppets. They just looked so life-like. The cast were very strong, but cast members who stood out for me were Simon Jenkins who was filling in as Albert Narracott, Colm Gormley as Ted Narracott, Jayne McKenna as Rose Narracott, Simon Wolfe as Arthur Narracott, Patrick Fleming who was filling in as Billy Narracott, Dominic Hodson as Captain Nicholls and last but certainly not least the people who puppeteered Joey and Topthorn. I had no idea that Simon Jenkins and Patrick Fleming were understudies due to the fact that they were incredible in their roles. I didn't realise until I got home and looked in my programme that they were understudies. I also found the 'New London Theatre' to be a lovely venue and very well organised. I am so sad that this show is closing in March and beg people to go to this amazing show before it closes! 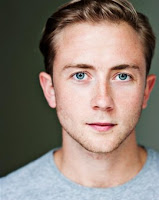 I still haven't quite gotten over the fact that Simon is only the understudy as he was so convincing in the role. I hope someday Simon will play the role full time, either before the show closes in the West End, on tour or in a different country. He has so much talent and I hope to see him in something soon, weather it be War Horse or something else.

Now for my final verdict on War Horse. I give War Horse…

This is a show for all ages and I would recommend this show to anyone and everyone.

Think it should have got a lower rating? If so comment below.

Join me next time when I will be reviewing Dirty Rotten Scoundrels.

-The Reviewer
Posted by The Basic Theatre Reviewer at 12:26 2 comments:

It's time for my review of Ticking.
Ever since I heard this show would be starring Anthony Head this was on my must-see list and I can certainly say I was not let down. It had a really gripping storyline about Simon, a young British man, who is awaiting his execution in a foreign prison cell after being convicted of the murder of a local prostitute. It’s his final visiting hour and his parents are due to arrive. He’s a bag of nervous energy and his lawyer still hasn’t got any news on his appeal. Even the British Prime Minister is calling for a pardon. As Simon and his parents wait breathlessly to see if his appeal will be successful, Simon must decide whether to confront the past with his father and expose a deeply hidden secret, or leave it buried and say his goodbyes. I was on the edge of my seat for the entire hour and 25 minutes. The set of the prison cell is really realistic and as it is quite a small theatre, with only 100 seats, it felt like I was there in the prison cell with them. The cast included Tom Hughes as Simon, Niamh Cusack as Sylvia, Anthony Head as Edward, David Michaels as Richard and Jackie Lam as the Prison Guard. It was very, very well casted. The cast just all seemed to gel so well together. I found the story to be really emotional and it was the saddest thing I have seen since 'The Elephant Man'. It was very well written and directed by Paul Andrew Williams, who I think deserves an award for his work with this show. I enjoyed the fact how occasionally they would add a bit of humour here and there so the play wouldn't be too depressing. The emotional state of Sylvia, played by Niamh Cusack, was really convincing and realistic. I feel the actors were born for these roles as it was all just so true to life. I was a bit wary before going to see the show as I had no idea what it would be about but I am so glad I got the chance to see it.

This was a really hard decision as I couldn't decide weather to give it to Tom, Niamh or Anthony, but in the end I had to give it Tom because he gives such a mesmerising performance. It would have been criminal not to give him featured star! I really hope to see Tom in another show soon because he is extraordinary!

Now for my final verdict on Ticking. I give Ticking…

I'm not too sure if shows performing at Trafalgar Studios 2 are eligible for Oliviers, but if they are Ticking definitely deserves a few nominations!

Join me next time when I will be reviewing War Horse.

*Please note this show has now closed.
Posted by The Basic Theatre Reviewer at 11:10 No comments: